How To Have Enough Money For Retirement By Age 50…If You’re Already In Your Forties. 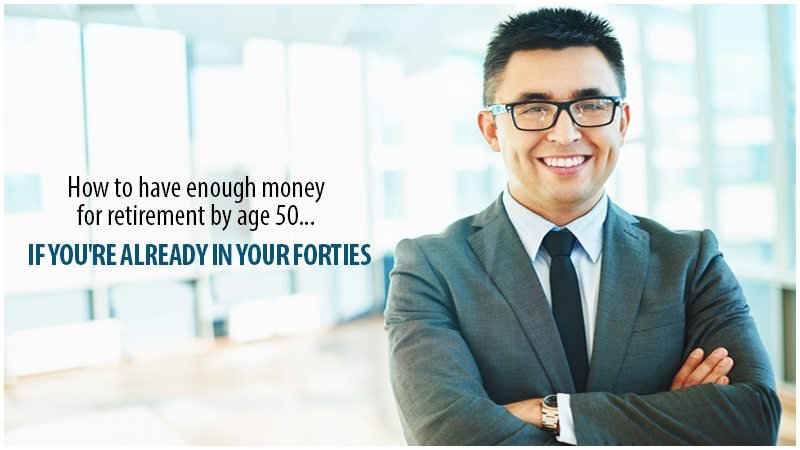 Many people work their whole lives, hoping to one day have saved up enough to retire.

It would seem that people are working up until later and later ages as inflation runs rampant and corporations amass more and more power over the job market.

It’s dog eat dog out there, but with a bit of knowledge, savvy, and drive, it is quite possible to stash away your nest egg and be ready to relax during your golden years.

You may be wondering “how can I pull THAT off?”

This article will share with you some ideas of just how it can be accomplished.

Obviously, working for a corporation, having a boss, and attempting to climb the latter works for a few, but for the most part is a great way to stay one inch underwater at all times until the bean counters in human resources decide you’re no longer economically viable.

There was a time in which seniority was a valued trait at a company and job security was taken seriously.

Now it would seem that seniority can count against you in some cases, as a corporation is concerned only with the bottom line, and can hire newer workers for less.

This should illustrate the importance of establishing a source of income in which you are your own boss.

As long as someone else holds the key to your future, retirement plans are never certain.

The good news is that if you have managed to save up a bit over the years, you now have what it takes to get ahead, and that is a nice little savings that can act as seed money to be invested in some smart endeavors which will finally put money to work for you, instead of the other way around.

It takes money to make money, they say.

While this may be a true statement to a degree, the amount one can use to plant that initial seed is less than one might think.

The trick is to use it in the right way.

If crafty moves are then made with that initial profit, then the growth of your savings can become exponential!

It’s what one might call “the monetary snowball effect.” If you understand how compound interest works, then what is written here should be quite clear.

So then, what are these “smart moves” that I speak of?

There is a wide world of opportunities and brilliant ways to invest your money out there, and to go over any number is perhaps beyond the scope of this article, however, there is one field in which profits can happen big, and profits can happen fast.

That field is of course investment property.

There are more and more people filling up the spaces on planet earth every day, and they are all going to need a place to live.

Instead of using your life savings to put down on a property only to commit to paying more and more every month at interest for the next three decades, put your money down on a home knowing full well that you won’t be paying back that loan.

Instead, the loan is a temporary stepping stone that allows you to control an asset as an investment property.

While there is definitely an art and a science to this, the basic idea is to build your net worth.

Invest and turn over your investment based on the market.

There are ways to make profits in this business even in a down market if you have the know how.

If you seek the know-how to pull off such a task, there are seasoned professionals who will partner with you as consultants to get you started.